The Jennifer Crook Trio are coming to Schtumm.. on Friday 31st October to celebrate the release of Crook’s new album, ‘Carnforth Station’.

With accompaniment from the outstandingly talented musicians Mike Cosgrave and Beth Porter, 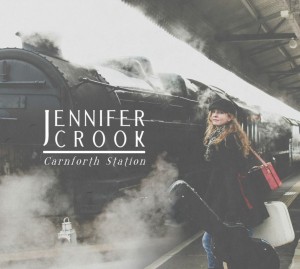 the Carnforth Station tour is already proving to be as exciting and touching as the journeys  depicted in the album.

Listen to The Net – with over 10,000 plays on Soundcloud it’s proving to be on of the album’s favourites.

This is the one and only time that the Jennifer Crook Trio will be playing the album in its entirety on the tour. The Trio will have support from special guest Kevin Brown (lap steel, Weissenborn) and the sound will be mixed in the more than capable hands of Stephen W. Tayler who has just wound up his stint working with Kate Bush on her sell-out shows.

Jennifer’s beautiful voice conjures up dreamy images and provokes genuine emotional responses with the stories of heartache, joy, loss and hope. She has earned a reputation as an outstanding harp player, singer, songwriter, composer and multi-instrumentalist.

To read the full review, go to http://www.folkradio.co.uk/2014/09/jennifer-crook-carnforth-station/

“Crook’s beautiful voice is immediately heard at it’s soaring, aching best on the opening brace of tunes:…songs of rediscovery and of missed opportunities, they capture the expressive quality of Crook’s vocals, her deft harp playing, and the understated excellence of the other members of her travelling trio: Beth Porter cello, fiddle, harmonies) and Mike Cosgrave (guitar, accordion, harmonies).”

“Singer songwriter and harpist Jennifer Crook is on fine form. A quality record that showcases her talents and allows her voice to shine.”

“Warm, organic, real…great songs and terrific musicianship. I love it – one of my fave albums already.”

Len Holton (From Albion and Beyond)

“Carnforth Station is, without any shadow of a doubt, Jennifer’s finest work to date.”

“I have no idea why this girl isn’t absolutely huge ‘cos she writes so many great songs.”

Check this out, one of our own Schtummers! ... See MoreSee Less

'Shifra Going No Where' Covid-19 got us all going no where. This collaboration expresses the simplicity and confusion that we are all living now days. ______...

Well the rain came and I got my music on and had a go at mixing. Bit of fun and it brought back some fond memories of playing live 🤣 ... See MoreSee Less