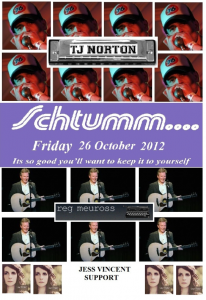 So what are we dishing up for all you lucky people this October Schtumm…. well his time its not big bands …. in fact its only 2 performers but these are the kind of performers that fill a big stage they hve spent decades paying their dues and are seriously on top of their game, 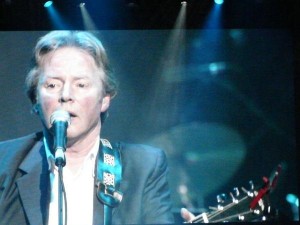 So we have Reg Mueross, this man came to our attention through Jennifer Crook and he blew us away with his wonderful ability to tell a story through his music. He has a fantastic voice and is a great guitar player. So we have singer, songs, great guitar what more do you want? Well I for one am a bit harder to please and there are loads of would be Dylan’s performing in clubs and bars across the country …………… we at Schtumm…. don’t want to ship in mediocrity! Reg stood out for us because although he has the individual skills they all seem to blend and evolve into this fantastic Troubadour, a brilliant musical story teller who drags you in and completely envelopes you in the music, the song, the story, the performance….. Its all one ….. Its Reg Mueross 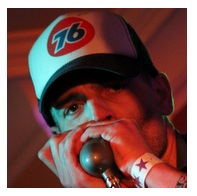 We met this man at the Schtumm…. Jamboree in December 2011. He was the thin quiet guy in the corner sitting and observing…. we did not even know what he played. After a while some guys got jamming and there was a groove that Mark Smulian (Bass) and Luke Coare (Drums) layed down, Jools Scott had joined in on piano when the tall thin one got up and approached a Mic. We all thought he was going to sing. Suddenly he produced a harmonica and started blowing, he was in and out of the groove, playing, grooving, weaving blowing – I saw the broad smile on Smulians face, the nod from Coare and we knew we had unearthed a gem of a player. TJ continued to amaze us that week he seemed to have a wonderful mixture of skill and taste, he can seriously play but he also knew when not to play and that is a rare skill in a young virtuoso.

After playing in a number of bands in and arround Bradford during 2012 TJ decided to put together a solo show with harmonica, percussion, beatboxing and a loop station. He is drawing on influences from jazz, blues, reggae and Hip Hop. All thrown into a wonderful cocktail underpinned with fantastic Gob-Iron playing……… This is going to be something very special.

AT THE QUEENS HEAD IN BOX