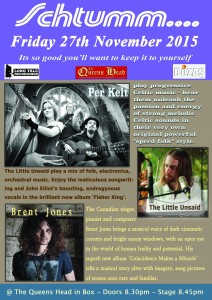 PerKelt has performed it’s unique, progressive Celtic music since 2008. All it’s members are highly-qualified, accomplished and award-winning musicians. They unleash the passion and energy of strong melodic Celtic sounds, having invented their original powerful “speed folk” style, which instantly grabs the attention of audiences everywhere. They are extremely proud to bring refreshing, innovative and evocative Celtic music in a way that has never been heard before. They simply cannot be missed! http://www.perkelt.com/

The Little Unsaid was stewed up in the badlands of West Yorkshire by multi-instrumentalist, producer, poet and songwriter John Elliott. After beginning as a solo project, The Little Unsaid has evolved into a growing community of touring musicians and producers blending folk, electronica, orchestral music and a meticulous songwriting craft with John’s haunting, androgynous vocals. Can We Hear It? The official video

An explorer of sound, soul and lyrical imagination, Canadian singer/pianist/composer Brent Jones brings a musical voice of dark cinematic corners and bright sunny windows, with an open eye to the world of human frailty and potential. Jones’s ninth album, Coincidence Makes a Miracle, recorded 2015 at Real World Studios searches the spaces of good intention. It tells a musical story alive with imagery, song pictures of scenes once rare and familiar.  www.quietearth.ca