Beth Porter and The Availables 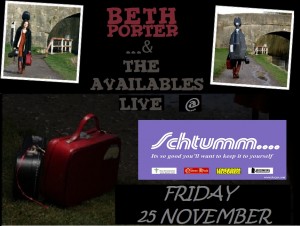 Just back from touring with Eliza Carthy as her ‘cellist, Beth is returning to gig with her own band, The Availables. Drawing from her classical background and extensive and varied live performance experience, Bethany creates a unique and refreshingly modern texture to her repertoire contrasting the cello, ukulele and recorder with a voice that will hold your attention right down to the last glorious note. 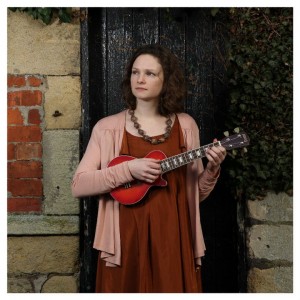 For the last few years, Beth has been collaborating with and playing for some of the best musicians in the area. Now she calls on some of them to play with her to work on creating a new sound. The Availables are variable but members for Schtumm include Sue Lord (Violin), Emma Hooper (Viola) from Beth’s string quartet The Stringbeans; Jools Scott (piano/accordion) from The Duckworths and who plays in the Pump Room in Bath; Jeff Spencer (bass) who is a prolific composer and producer/engineer; and James King (drums) also an engineer and drummer for Anta. James will be debuting as an Available!
The Availables have been compared to The Penguin Café Orchestra, The Incredible String Band and Kate Bush!
Beth has recorded cello for over 70 sessions since she came to Bath in 2000 and has played for many artists including Peter Gabriel, Newton Faulkner, The Unthanks, Jackie Oates, Jim Moray and Kula Shaker.

Beth is by far at the top of local talent; You can’t meet anyone in the south west these days who hasn’t heard of her, either playing cello solo, recording or with her incredible band the availables. We are lucky to have her and the band performing for us at Schtumm… catching them at a free moment out of there always busy schedule. A night not to be missed, and a performance that promises to be mesmerizing as always.

Recode (Acoustic) are a power-pop from the Bath area. We have been working with them for about a year and the band has been developing a great repertoire. Its fantastic to see some enthusiastic young creative people get together and start something. Then to shift and shape it into a band with an identity, then to start getting good. Its been a joy to watch.

Last Friday they took a massive gamble and did an acoustic set at the White Hart in Atworth with Virpi Kettu on violin. I was very pleasantly surprised. The songs translated well and the blend between Viripi’s violin and Luke Coare on guitar was amazing. This made a magic bed for Steph Heath to sing on – and sing she did!

They are going to be doing the acoustic set again at Schtumm…. 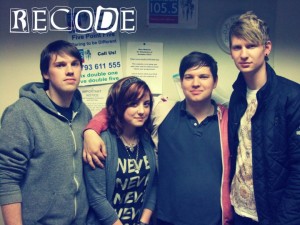