for another quality night of Schtumm entertainment! We’ve been waiting for months for both these bands to have a free slot, and getting them on the same night is more than lucky. This one’s a cracker!! 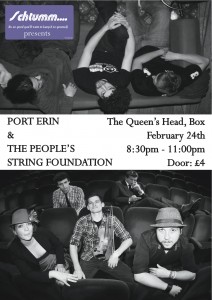 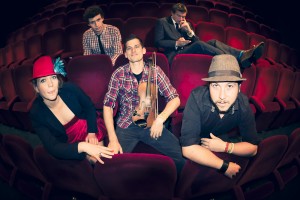 The South West is the appropriate home for the beautifully evocative, languid and lush music of The People’s String Foundation. Theirs is unfamiliar territory, scaling the heights of jazz, hip-hop beat-work, Middle Eastern melodies- performed with an eye toward experimentation and nods toward the avant-garde. Essentially the brainchild of multi-instrumentalist and jazz singer Ben Sutcliffe and world/blues guitarist Zaid Al-Rikabi- the duo combine to wonderful songwriting effect but it’s in their live performances that the group’s powerful dynamics come to the fore, the duo enlisting the assistance of a troupe of inspired and talented musicians.
https://www.facebook.com/thepeoplesstringfoundation 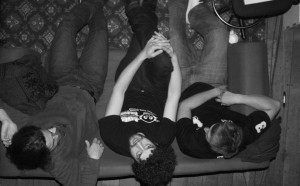 Formed in the depths of the West Country in January 2007, Port Erin have extensively toured the U.K. including shows at Glastonbury Festival (2010, 2011) With a unique sound that defies genre placement, they mix up influences such as Jeff Buckley, XTC, Teardrop Explodes, Field Music and Pat Metheny. Port Erin are currently adding the finishing touches to their 2nd album, recorded with Marco Migliari in The Wood Room at Real World Studios. Double A side single ‘ Hold On / Smack Bang In The Middle ‘ due for release April 2012 with the full album (title TBA) following in June.
https://www.facebook.com/porterinmusic

See you there! xx