So we have finally got round to the 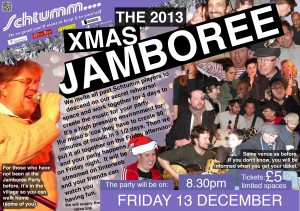 Whats the Jamboree all about?

Well we get in touch with all bands who have played Schtumm over the last 3 years and invite them down to a secret magical rehearsal space and get them to create a special party for you.

Tickets are available from The Queens Head bar in Box and or jamboree2013@bozas.com

The Party Friday 13th at a venue to be revealed in Box.

How does it work?

Well we get in touch with all bands who have played Schtumm over the last 3 years and invite them down to a secret magical rehearsal space and get them to create a special party for you.

The rules are simple.

(In practice…….  3 days to write 90 minutes of music and to rehearse it, learn it and play out live with musicians you only met 3 days before is one heck of a challenge and big respect to the artists who actually pick up the gauntlet)

We have no money to do this so the muso’s give up their time, the technicians and camera people and a few villagers give up their time, Some people take leave from work to get involved.  There are also a few wild cards that have been given out to bands that will play Schtumm… next year like Papam Faya from France and some other musicians that the Schtumm…. musicians have met on their travels. This is community action, some people are traveling from France, Israel , and further afield – the participants give a lot.

Their pay-off is new connections, new songs, new ways of doing old things, responding to intense pressure and a new camaraderie.  They leave Schtumm…. fired up for the new year. That’s the only reward. Schtumm finances the rental of the spaces and the equipment, all the crew work on a voluntary basis and over the last 3 years have done a brilliant job.

It will be streamed so your friends can see the show on the web.

We have had some extraordinary bands playing Schtumm…. this year.  The line up has been eclectic and risky sometimes. We have had new bands like Uko and The Dubsouls and long established acts like Joseph Arthur, Dub Colossus and The Flamenco Thief. The one common thread is that the entertainment value has always been high and the bar for skill levels of the artists set quite high.

We sincerely hope that we have managed to entertain the Schtumm…. in the style they have been accustomed to. We have received some wonderful emails from Schtummers thanking us for what we do and that is always heartwarming. As per usual we still give all the money to the artists and on more than one occasion Dean and I have topped up the kitty as it would be unfair to expect artists to go home with what could be less than the minimum wage. (That is very common in UK venues and is something we are fighting).

We are trying to get the filming and streaming sorted to broaden the reach of Schtumm…. so that you can tell your friends far afield about it. We are not encouraging those close by to stay at home. The stream is great but it does not beat the atmosphere of the actual room. :) 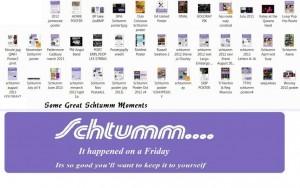 I have just had a look through the year and this is who we have had on and its quite a cool list. A big thank you to the artists who have graced our stage this year.

Rickfest where many Schtumm artists performed. Schtumm also worked to provide the backup for the festival with a PA System, Lights, stage management, licensing advice, logistics support and even running water into the site!

Thank you all for your support and encouragement this year, thank you to all the artists and wishing you all a happy festive season.

Thanks to Nick Churchill for the pics!