So we did the Schtumm…. jamboree.

Thanks to Dean and Chris who helped formulate the plan and who also suggested that we do this as a freebie for all of you who have been so faithful to Schtumm…. over the year.

We rented the rehearsal room from Real World and sent out an email list to all the players and associates. We managed to assemble a group of about 30 musicians and gave them the challenge of working together to create a party for all of you.

Over the three days receeding the party they got to meet each other, discover who played what and who gave something special when it was needed. Generally it would start with someone saying – “Hey guys – this is an idea I have been noodling with for some time but its never gone anywhere – is this interesting?” That would then get someone adding a bass line, someone ambling over to the drum kit, someone starting a harmony, suddenly a violin comes in and then a chank, chank on a guitar and the idea would take shape.

Often people would be playing their second instrument, or we would get the sound man on drums – it was just whatever felt right at the time. The standard of musicianship was very high and we also had some people who had some of the meore wacky instruments like melodica, vibes and lap steel guitars. We were wonderfully fortuitous in having a great string section with 2 cello’s and a violin and lots of people who could sing. A few of the afternoons were spent doing a short talks/discussions on the industry, how to use the web and how we all plugged in. This bonded the group and produced some wonderful comeraderie. The cement was Jerome’s cooking. Jerome provided wonderful meals for us in the house at Real World and we all tended to sit round 2 big tables, often also chatting to other musicians who were at Real World. We also had local producers and engineers dropping in and adding to the vibe.

Come Friday – Dean and the PA & lighting crew turned up. We are lucky to have some great PA crew who run the RogerDean PA company and also Phil who has a serious lighting rig. The room was converted on Friday morning ready for a dress rehearsal on Friday afternoon. Whilst the band was running through some numbers Colleen Hixenbaugh and I went through the list of songs and players and put a set list together for the evening.

We came up with 15 numbers plus an encore – This effectively meant 16 different bands rotating on stage. A nightmare for any sound man so Dean had his work cut out for him. Also for his sins he had accidentally sat behind a kit when Darren from Paul Middleton’s band had come up with a new song – so on stage he went and Luke Coare had to put down his guitar and twiddle the knobs for a while. (A true collective effort) .

At 8pm the audience started arriving and the evening opened with a wonderful atmospheric piece that Richard Farr had come up with at the last minute. It was haunting and beautiful, it also set the tone and the bar for the evening. It was apparent that this was going to be a special night and it was!!!!

Here are some pictures that Nigel From Kafuffle took  [button url=”http://www.kafuffle.co/” ][/button] 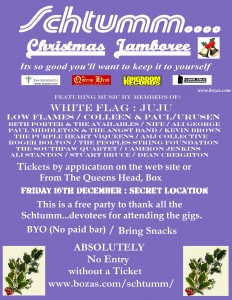 Dickie Chappell, Dean and Rob decided to have some fun in the village. We thought it would be exciting to get a club together where we could put on music that was not normally found in village pubs. something a little different, something that would normally grace a much bigger stage.

We wanted to experiment, to push artists, to create a buzzy environment and to make it a special place to play. Over the last year we have been very privileged and have seen some extraord

inary acts. Everyone I speak to has a different favourite act. That’s the way it should be. Enough variation to make it interesting exciting and innovative.

Chris and Dickie got really involved with the camera work and Dean pressed record for most events. I think we are all lucky to have a little club with an awesome sound system, professional crew and a wonderful vibe. Thank you to all the artists who played Schtumm….. over the last year.

Now What the hell is a J

amboree. Its a term I nicked from Scouting. Not sure that its a fair nick as I was kicked out (sorry Baden!) But the idea is to get a whole lot of like minded people together (preferably away from where they normally hang out) and get them doing what they are good at. In this instance we have invited all the musicians who played Schtumm…. over the year (and some who will play next year) and got them all together away from where they normally hang out and i have asked them to create something special for Friday night.

All the music played on Friday will be put together in the three preceding days. So most of what you hear will be brand new music created specifically for this event. The theme is Christmas and party so there will be an emphasis on FUN.

This is an opportunity for the Schtumm…. devotees to have a party that they can walk to (and walk home from) with a band that they could never afford or assemble. This is a chance to have FUN and do something extraordinary. Space will be limited so it is by ticket although the tickets are free, Bring some friends, bring your own booze, bring some snacks and make this a gig the musicians will be really glad they played.

We will film and record the gig so its a chance to say I was there!!!

If you wish to join us, please email info@bozas.com with the subject line ‘Schtumm Christmas Jamboree ticket’, or ask Dean at The Queens Head, Box.

We will send you a ticket to print out, and put your name on the list at the door.

Stricly NO ENTRY without a ticket!